They don’t call Florida the Sunshine State for nothing

Among the many reasons why you shouldn’t move to Florida: alligators, mosquitos, sink holes, hurricanes, people who drive with their left turn signal constantly on, the preponderance of blue hair, OJ Simpson lives there, Don Johnson, the 2000 presidential election and drive-in liquor stores.

The argument in favor of moving to Florida: sunshine.

If you are someone who can live with the unpleasant other things, but can’t live without sunshine then Florida has your name written all over it. Perhaps you aren’t thinking about moving there, but a visit is what you have in ... [read more] 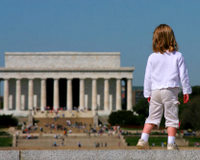 It might be built on a swamp and it might be a political swamp, but the nation’s capital is still a great place for children to visit. I should know. Just about every year from third grade through eighth grade my class made a field trip to Washington, DC. It got to the point where I could give a tour of the city better than the tour guide and where I actually grew tired of the freeze dried ice cream at the National Air and Space Museum.

With its many monuments ... [read more]


It’s no Dream. Kids Fly for $5 to Disneyland Resort

Did you know that this is The Year of a Million Dreams? If you have been paying attention to all the Disney commercials recently you couldn’t help but know this. Disney and dreams apparently go together like chocolate, graham crackers and marshmallows. One person’s dream can be another person’s nightmare, however. Disneyland and the other assorted properties are the happiest place on earth as long as you have enough money to pay through the nose.

Southwest Vacations to the rescue. The little airline that could is doing its ... [read more]