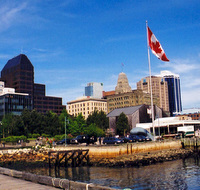 New Brunswick’s capital, Fredericton, is home to an array of architectural wonder. Walk through the majestic Waterloo Row and marvel at the design of some of the stately private homes, or see the Legislative Assembly Building. Twenty minutes west of the city is the award-winning King’s Landing Historical Settlement. Here staff will re-enact the lives of British North American pioneers in the 18th century. Other activities such as The Haunted Hike by the Calithumpians will lead visitors through a different dimension of Fredericton.

The city of Moncton in New Brunswick is rich in agricultural, railway, and industrial heritage, but it is also known for its various attractions. The Tidal Bore, created from the powerful tides of the Bay of Fundy, and the mysterious Magnetic Hill are two top draws. Canada’s third most visited natural attraction, Magnetic Hill will pull your car uphill when you take your foot off the brake. A nearby themepark and zoo can make the outing a whole day’s worth of adventure.

Watch the Petitcodiac River swell and reverse directions from the Riverfront ... [read more]

New Brunswick embraces that perfect blend of the contemporary with the classic! Located on Canada ‘s east coast, the province of New Brunswick shares a border with Québec and Nova Scotia as well as Maine in the northeastern United States. Where else could you find world-class cities only moments from incredible natural wonders – the world’s highest tides, winding rivers that stretch for days, or one of the last pristine sand dunes on the eastern shore. At the Hopewell Cape, view the ‘flowerpot rocks’, created by melting glaciers and tidal erosions. The world’s ... [read more]

Once a haven for Loyalists fleeing the American Revolution, St. Andrews By-The-Sea blossomed into a seaside resort town combining the best of New England and the Maritimes. Boasting “no hay fever and a railway”, the grand hotels and choice amenities made St. Andrews Canada’s first true seaside resort.

Visit the 1800s at the Sheriff Andrews House, the Ross Museum, the Blockhouse and the County Courthouse and Gaol. Drive across the ocean floor to Minister’s Island. See underwater inhabitants at the Huntsman’s Aquarium Touch Tank or experience salmon face to face at the Atlantic Salmon Interpretive ... [read more]

The self-proclaimed, “Greatest Little City in the East”, Saint John area is an incredible region to visit! Located on the eastern coast of Canada, greater Saint John is home to approximately 125,000 people, and is only a 4 hour drive from Halifax, 8 hours from Boston, and 11 hours from New York City. A world-class destination, Saint John is also port of call for many cruise ships, and hosts a variety of festivals and special events throughout the year (including the critically acclaimed Festival By the Sea). As the first incorporated city in Canada, ... [read more]