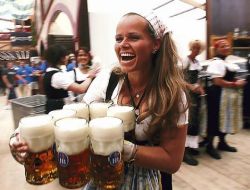 Fall is in the air, and with changing foliage and crisper temperatures also comes the famed Oktoberfest celebration in Munich Germany. While I have never had the opportunity to attend this giant 16-day beer festival that manages to attract about 6 million people annuallymaking it one of the largest fairs in the world. My father often recounts stories of his time at Oktoberfest, much of which was spent swinging from the rafters in the giant tents and drinking enough beer to make him ill for days afterwards. For those who are ... [read more]


Fly to Frankfurt or London before the Summer Crunch

There is hope, however, if you are able to travel between now and the start of the summer crunch (late May). This is kind of the in between period where prices creep up but aren’t quite ... [read more]