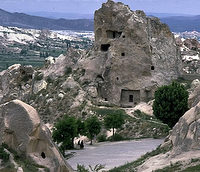 Here is an adventure for you. BootsnAll has designed an awesome 12-day summer trip to Turkey. Limited to just 12 people, this adventure tour has it all: horseback riding, rafting, trekking, cycling, and a 4-day cruise on an old world sailboat in the Mediterranean Sea, complete with swimming, snorkeling and seafood.

Beginning and ending in the one-of-a-kind city of Istanbul, the tour features a stop at the Goreme Open Air Museum, a UNESCO World Heritage site which has 1000-year-old cave churches decorated with frescoes. If you have never been ... [read more]

Once known as the famous Constantinople, the capital of the Ottoman Empire, Istanbul is now a sprawling mega-city embracing two continents, one arm reaching out to Asia, the other to Europe. In the city’s heart, the Bosphorus Strait, course the waters of the Black Sea, the Sea of Marmara and the Golden Horn. The historical part of the city, Sultanahmet, contains the historical treasures of the Blue Mosque and Aya Sofya. As you tour the walled area, famous for holding off invaders for centuries, explore and get lost down the twisting alleyways, imagining ... [read more]