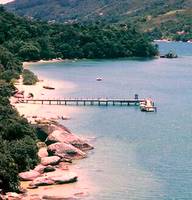 The samba, the beaches, the parties¦Brazil is one of the most funnest places to visit on this planet. Imagine the time you will have aboard a 4-night Costa cruise! The Costa Victoria is your vessel on a journey that begins and ends in Santos, a city in Sao Paulo. In addition to being the entry point for the bubonic plague in Brazil in 1899 (no sign of it today!), Santos has the biggest seaport in Latin America, a Coffee Museum that will leave you buzzing and a soccer memorial ... [read more]

Rio de Janeiro has been nicknamed the Cidade Maravilhosa – “Marvelous City”, and how true it is. Nestled in the heart of Brazil’s southeastern coast, the cosmopolitan metropolis has just about everything to offer.

Start with the glorious beaches of Copacabana and Ipanema, which embrace the warm, fresh Atlantic Ocean. Here both machismo and sensuality come alive, and fun under the sun is an understatement with futebol, volleyball, sunbathing, love and lounging all around. From the beaches, take to the mountains that divide the city in half, for hiking, ... [read more]

Salvador, capital of the state of Bahia, was the first major port and the capital of colonial Brazil for almost two centuries. Known as the ‘African heart of Brazil’, removed from the artificial glamour of Rio de Janerio, the city lies between green tropical hills and broad beaches along the bay of Todos os Santos. It was built on two levels with administration buildings and residences constructed on the hills; forts, docks, and warehouses on the beaches. To this day the city is still divided into upper and lower cities.