Plan Ahead for your 2008 New Year’s Cruise 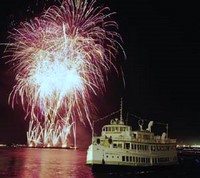 As nice as he may be and as charming as the tradition is, spending another year watching a ball in New York drop while Dick Clark wishes you a happy new year is something that you should be actively seeking to avoid. Why let everyone else have the time of their life while you sit at home trying to stay up until midnight? This year, you can make it a New Year’s to remember by being aboard a cruise ship.

You don’t have to worry about drinking and driving the captain is your designated driver and the entertainment is already built in. If you want romance, think about being under the stars while the clock ticks down and the midnight kissing commences. If you want entertainment, a cruise ship is nothing but entertainment especially on a big holiday evening. If you want food, you will be able to eat to your heart’s content without having to worry about making a reservation at a fancy restaurant. If you want Dick Clark, well, there are always televisions on board and I suppose that you could sit in your cabin and watch the ball drop.

New Year’s deals tend to be cheap this time of year and grow increasingly more expensive as the holiday season approaches. Book early and save in the long run.