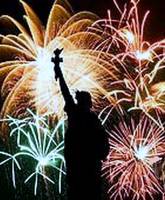 Fireworks, family and fun. Those are the things that many of us associate with the Fourth of July holiday. It was so very kind of the founders of the United States to choose to do the whole independence thing during the summer months. The extra day off during the summer is always a welcomed thing.

There is no shortage of choices available to those who are looking to get away for Independence Day. Heading to the beach is always a popular option, camping out in the woods usually doesn’t disappoint, and staying home to watch the Boston Pops on television is something many a broke person (ok, me) has done in the past.

If you want to see nature’s own fireworks, you also can’t go wrong by seeing Old Faithful at Yellowstone Park. Just like baked beans, jell-o mold, and barbecues, she is part of a grand American tradition.