A Puerto Rico Vacation Package that will make you Suave 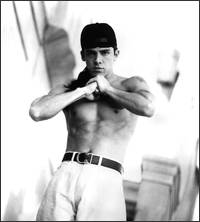 If you have ever in your lifetime had an itch to visit Puerto Rico you will want to read on because I have the perfect scratch just for you. If you have no interest in Puerto Rico whatsoever but still like reading poorly written prose about vacation deals, keep on reading on too.

Cheap Caribbean has an outstanding deal on vacation packages to Puerto Rico. The only real catch is that you have to travel during the summer months sometime between June 14 and July 29, 2007. If you have ever been in a wet sauna than you have a rough understanding of what Puerto Rico’s weather in like in the summer. Bring plenty of extra clothes because you will sweat. That is a guarantee. Even better, bring no clothes and just walk around the beach in the buff. You’ll still sweat but think of the money you will save on laundry.

You don’t often hear Puerto Rico described as being paradise and that is probably because it isn’t paradise. There is traffic, the cities can be a bit grungy and occasionally you’ll encounter someone who is less than friendly. But it does have many things going for it including great beaches, good food and drink and plenty of friendly people who will go out of their way to show you a good time.